Summary: While antipsychotic medications can be extremely helpful for certain symptoms such as psychosis, they can unfortunately cause various side effects including extrapyramidal symptoms (EPS). Management strategies include giving diphenhydramine for acute dystonia; stopping or reducing the dose of antipsychotic; switching to a second generation; using a lower risk second generation antipsychotic such as quetiapine.
Add to Info Cart
PDF 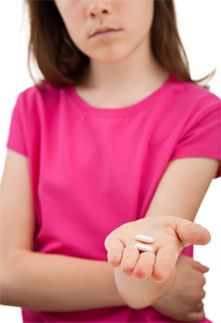 D. is a 14-yo male in your practice. He was recently admitted to hospital for a brief psychotic episode, while in hospital was started on risperidone. He was discharged and is seeing you for follow-up. While his psychosis symptoms have improved and he is functioning much better, he is brought in for a same day visit by parents. He complains of neck stiffness and troubles moving his eyes...

Beneficial antipsychotic effects and extrapyramidal effects are due to binding to D2 receptors in the central nervous system.

In other words, there is a very margin between therapeutic effects and extrapyramidal effects.

Though less frequent agents that block central dopaminergic receptors may also cause EPS (D’Souza, 2019) such as:

Ask the patient to remove any gum or objects from their mouth.

Should be normal with EPS.

There are no laboratory nor imaging tests.

Does the patient have risk factors for EPS such as:

If so, consider pre-emptively doing the following:

Let the patient and family know that if the patient has an acute dystonic reaction, they can give themselves a dose of over-the-counter diphenhydramine (Benadryl) until they see a health professional.

Is the patient on a first generation antipsychotic?

Are there multiple antipsychotics?

Is the lowest possible dosage of the SGA being used?

Is quetiapine or clozapine being used?

Has the patient been seen by neurology?

Are there still issues with EPS despite the above being tried, AND is antipsychotic treatment absolutely required? If so, then consider adding:

D. is a 14-yo male in your practice. He was recently admitted to hospital for a brief psychotic episode, while in hospital was started on risperidone. He was discharged and is seeing you for follow-up. While his psychosis symptoms have improved and he is functioning much better, he is brought in for a same day visit by parents. He complains of neck stiffness and troubles moving his eyes...

What do you do?

You give him over-the-counter diphenhydramine (Benadryl), and symptoms improve within about 15-minutes. You ask him to stop his antipsychotic medications. You contact his treating psychiatrist to arrange rapid follow-up.

Written by the professionals at CHEO and the Royal Ottawa Mental Health Centre.

PDF
Psychosis in Children and Youth: Information for Parents and Caregivers
What Is Psychosis? Psychosis is a serious medical condition in which a person has trouble telling the difference between what is real and what is not real, typically with symptoms such as delusions and/or hallucinations:   Delusions: These are fixed, false beliefs, which do not have a basis in reality. Paranoid delusions are one common type of delusion, where a person may become suspicious of others and worried about being harmed by others. It may include fears of being spied on or being followed. Delusions may be "bizarre" which are delusions that are strange and completely impossible, e.g. believing that one is ...
Add to Info Cart

PDF
Psychosis: Information for Youth Coping with Psychosis
My Story, Part 1 It all started in college. I began having a hard time with school work, and my part-time job. I just couldn’t focus on anything, and it was like my thoughts were all jumbled. And then I began hearing this really negative voice -- it was quiet at first, then it got louder. I began to feel that everyone was watching me.    Things got so bad, that I had to quit my job and I began skipping classes. I hid this from my parents, but my friends started to worry. I just wanted to hide all day. When I watched TV, I thought the people on the shows were speaking directly to me.    Luckily, I had a ...