Summary: Alzheimer’s is the most common form of dementia, causing problems with memory, thinking and behaviour. Alzheimer’s is an incurable degenerative disease. Patients usually have memory loss as an early symptom, however they can remember distant events. There is no cure, which means that identification and referral to appropriate supports and services is key.
Add to Info Cart
PDF 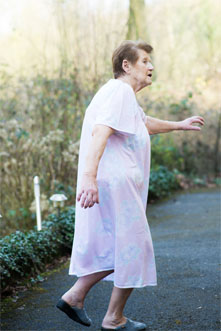 ·      Possible Alzheimer’s Disease is diagnosed if there is no evidence of a causative Alzheimer’s disease genetic mutation from either genetic testing or family history, and all three of the following are present:

D. The disturbance is not better explained by cerebrovascular disease, another neurodegenerative disease, the effects of a substance, or another mental, neurological, or systemic disorder

Source: The 4th Canadian Consensus Conference on the Diagnosis and Treatment of Dementia (CCCDTD4)

There is no cure for Alzheimer's, however there are non-pharmacological and pharmacological treatments that are used to help improve symptoms and slow the progression off the disease.

To treat cognitive symptoms (such as memory loss and confusion), the two main types of medications in use are

Who to Refer To

Donepezil, galantamine, rivastigmine and memantine for the treatment of Alzheimer's disease, NICE Guideline, 2011.

Reviewed by members of the Department of Psychiatry and Family Medicine at the University of Ottawa. Reviewed by members of the Family Medicine Program at the University of Ottawa, including Dr's Farad Motamedi; Mireille St-Jean; Eric Wooltorton (2014). Special acknowledgements to Dr's Prakesh Babani, Psychiatry Resident (uOttawa, Class of 2017) and Christopher Clarkstone, Medical Student (uOttawa, Class of 2017).

PDF
Dementia
Sally's Story "I was just going out for a walk..."   Sally is a 75-yo widow, active in her community, with an outgoing personality and a great sense of humor. She lives alone, but her daughter lives in town, and checks in on her occasionally. Over the last few months however, she has become noticeably more forgetful, to the where she has gone for walks while leaving the stove on. Last week, she went out for her usual morning walk, but got lost. Luckily, one of the neighbours that was driving by happened to recognize her, and brought her home.   Is this normal aging? Or is it something else? What is ...
+ Suggest External Link

Dementia
is a progressive decline of one's brain functions such as memory, attention, judgement, and personality.
Filter by age: