Summary: Tic Disorders and Tourette Syndrome are conditions where individuals have tics. Tics are repeated, sudden, movements caused by the person's brain. Note that tics themselves are harmless, but are often treated when they start causing social problems at school, work or home. Effective treatments exist, include types of behaviour therapy as well as medications.
Add to Info Cart
PDF 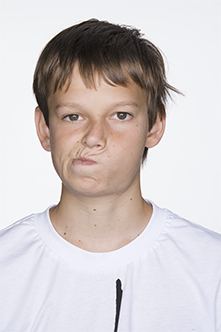 We all get thoughts in our heads and urges to do things. For example:

Most of us are lucky because we have "brakes" that keep us acting out every single thought that we have.

But imagine what it would be like if you had ‘leaky brakes' (in the words of Dr. Duncan McKinlay), and your body acted out every thought that you had? Worse, what would it be like if others pointed out your tics and laughed at you?

That's what life can be like for people with tics or Tourette syndrome...

Basically, part of the brain responsible for controlling the person's muscles is ‘auto-pilot' and doing things on its own, like what happens when you have an cough or a sneeze.

Tics can be controlled for a short periods of time, but it requires a lot of brain power and mental effort to do so. And then later on, usually those ‘pent up' tics get released later on.

What Types of Tics are there?

Tics can be classified in a few ways, as being motor or vocal, as well as being simple and complex.

1. Motor tics are movements in the head, arms, legs or other parts of the body.

2. Vocal tics are where the person makes noises.

Though in the past people with tics may have been blamed for having their tics, it is nowadays understood that these individuals have a genetic difference which causes imbalances in certain brain chemicals.

In some cases, this genetic difference is passed on from parents, whereas in others it seems to arise on its own.

How Common are Tics and Tourette Syndrome?

In 3-4% of school age children, symptoms of either motor or vocal tics will last more than  a year (Leckman et al., 2001). These children would be considered to have a chronic tic disorder. Children with both vocal and motor tics that persist for more than 1 year generally meet criteria for Tourette syndrome.

If You Suspect Tics or Tourette Syndome

If you suspect that your child has tics or Tourette's, then take your child to a family doctor or paediatrician. The doctor can do a closer examination, and then recommend other services if necessary.

Although in the past it was believed that Tourette Syndrome was lifelong, newer evidence suggests that the symptoms are worst around at age 10-12, and that symptoms improve over adolescence  (Leckman et al., Pediatrics, 1998).

Other Conditions Seen Along with Tics and Tourette Syndrome

Supporting Someone with Tics and Tourette Syndrome

There are many ways you can help someone with tics and Tourette's.

Mild tics that do not cause severe difficulties or get in the way of life are usually not treated.

Moderate to severe tics however, that cause problems at home, work or school, may be treated with behavioural therapies or medications

There are different behavioural therapies that may be helpful.

The person with tics is taught how to:

Behavioural therapies do not have side effects, unlike medications. However, it can be challenging to do if one's symptoms are severe, particularly with younger children.

2. Medications for Tics include:

Advantages / Disadvantages of Medications: Medications can be helpful for more severe cases especially if other strategies (such as behaviour strategies) haven't worked.

Where to Find Help?

See your family physician / pediatrician to explore whether it is tics or Tourettes, and to see whether or not it would be helpful to get a referral to other specialists such as neurologists or psychiatrists.

For behavioural therapies, usually it is provided by psychologists. To find a practitioner, consider  http://www.canadianbfrb.org/canadian-treatment-providers/

Life's a Twitch is a website founded by Dr. Duncan McKinlay, a psychologist who himself has Tourette's. Web: http://www.lifesatwitch.com

Written by the eMentalHealth Team.

Information in this pamphlet is offered ‘as is' and is meant only to provide general information that supplements, but does not replace the information from your health provider. Always contact a qualified health professional for further information in your specific situation or circumstance.

There are currently no additional screening tools attached to this article.
Filter by age:
Add to Info Cart
Examples of Common Workplace Accommodations   Accommodations should be based on your needs and the employer’s resources. There is no standard list of reasonable accommodations, but here is a list of commonly provided workplace accommodations: Job coach assistance in hiring and on the job mentoring as necessary. Job coach/mentor could be from an external agency or be f...
More...