Summary: Delayed sleep-wake phase disorder (DSWPD) is a chronic dysregulation of the person’s circadian rhythm (biological clock), compared to the general population and societal norms. People with DSWPD fall asleep at least 2-hrs later than what is socially acceptable, which causes problems functioning when it is necessary to adhere to societal norms of sleep and wake times. It means that the person is unable to fall asleep and wake up in time for societal obligations such as school / work (typically between 6-8 AM). On the other hand, the person would sleep better if simply allowed to fall asleep later e.(g. 12-4 AM) and wake up later (e.g. by 8 AM - 12 PM).
Add to Info Cart
PDF 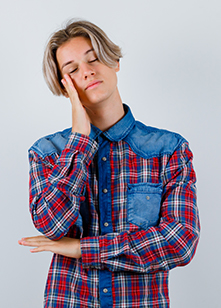 D. is a young adult living at home with his parents. For the past year or so, he stays up until 12 AM or later. He wakes up around 8 AM, tired and exhausted. Parents try their best to ensure there are no screens past 9 PM, but nonetheless, he is simply unable to fall asleep earlier.

By 11 PM, it is as if he gets a “second wind,” at which point he doesn’t feel like sleeping. He finally falls asleep past midnight but then struggles to get up at 8 AM for school, even with multiple alarms and parents’ nagging.

DSWPD is a sleep disorder characterized by a discrepancy between one’s circadian clock’s internal setting and the sleep wake schedule required by one’s occupational, educational or social obligations.

When the person tries to sleep like everyone else (e.g. go to bed at 11 PM, wake up at 7 AM), their sleep quality is very poor, however they have significant improvements in their sleep architecture and continuity when allowed to go to bed and wake up later.

The timing of sleep is controlled by the master circadian clock, located within the suprachiasmatic nucleus.

It is this clock that determines what time to go to sleep, what time we wake up.

Our clock requires constant “resetting” by external time cues (aka “zeitgebers”), and the most important ones that set our clock include exposure to sunlight during the morning and daytime; physical activity, body temperature, meals; exposure to darkness in the evening.

According to the International Classification Sleep Disorders (ICSD-2)., diagnosis is made by history of:

According to the DSM-5, delayed sleep phase type is:

There is high comorbidity with:

To make the diagnosis of DSWPD, the following is recommended (American Academy of Sleep Medicine, 2005):

Diagnosis is confirmed by a delayed pattern of the habitual sleep and wake cycle.

A polysomnograph or overnight sleep study can be helpful.

Side Effects with Melatonin

Caution and monitor closely with the following populations:

Does the patient have comorbid ADHD?

Studies have confirmed the use of melatonin in treating children with comorbid ADHD, though there is a rare adverse effect of new onset seizures (Smits, 2001).

Given the high rate of sleep phase delay in adolescents, there are school districts that have accommodated this by starting school at a later time.

Prognosis is good as DSPWD generally responds well to treatment.

You recommend the following:

You see him a few weeks later and he reports improvement in his sleep wake cycle.

When and Where to Refer

For patients with delayed sleep-wake phase disorder that do not respond, consider referral to a sleep specialist.

MindHealthBC
Online service to help you find the help you need for depression, anxiety, and other mental health and substance use conditions. This includes: * Local support groups and health services within Vancouver, Richmond, and Coastal communities * Online information pages and workbooks provided through BC Partners for Mental Health and Addictions Information and other trusted BC sources * Self-help or supported self-help programs such as the BC Canadian Mental Health Association’s Bounce Back® Online (available without a doctor’s referral) * Valuable resources for friends and family members seeking information for their loved ones.
Vancouver Coastal Health/ Providence Health Care
Audience: Public (www.ementalhealth.ca)
Resource type: Mobile app, such as for iOS, Android, etc., Movies and videos, Printed materials including handouts, brochures and books, Websites including blogs, support forums

Sleep and Pain Resources for Children, Parents & Healthcare Providers
Information and resources to help children with pain and/or sleep problems, their parents and healthcare providers. When children and young people have pain and/or cannot sleep, they can have various difficulties * school performance and attendance suffer * making friends can be more difficult * disruptive, aggressive and other negative behaviors are more likely * learning and concentration are harder * depression and misuse of alcohol and drugs is more likely * managing chronic health conditions becomes harder * injuries take longer to heal and illnesses last longer * loneliness, isolation & poor self-esteem are more likely * the whole family is effected by disrupted schedules and they may develop sleep problems themselves.
Department of Occupational Therapy, University of Alberta
Audience: Public (www.ementalhealth.ca)
Resource type: Printed materials including handouts, brochures and books, Websites including blogs, support forums

Sleep: A critical but overlooked aspect of dementia management
Website providing information about sleep and dementia from the University of Alberta. Provides reliable, evidence-based information about the relationship between sleep and dementia, and provides help in accessing resources for assessing and managing sleep problems in older adults with dementia. A full report of our review and downloadable patient education brochures on different non-pharmacological sleep interventions is also accessible on the website.
University of Alberta
Audience: Public (www.ementalhealth.ca)
Resource type: Printed materials including handouts, brochures and books, Websites including blogs, support forums
Filter By:
Reset Filters
You may also be interested in the following subheadings:
Counselling and Therapy
Day treatment programs
Assertive Community Treatment (ACT) teams
General Community Mental Health Services

There are currently no additional screening tools attached to this article.

Filter by age:
Add to Info Cart
Examples of Common Workplace Accommodations   Accommodations should be based on your needs and the employer’s resources. There is no standard list of reasonable accommodations, but here is a list of commonly provided workplace accommodations: Job coach assistance in hiring and on the job mentoring as necessary. Job coach/mentor could be from an external agency or be f...
More...